ROBERT FROST
Two roads diverged in a wood and I – I took the one less traveled by, and that has made all the difference. Robert Frost (the other one) 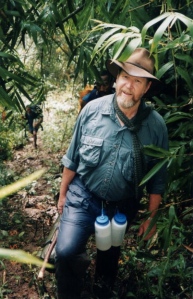 If you are choosing a guided tour with Toogee Treks, Robert will be your trek leader, he holds a Diploma of Tourism (Guiding) and is the principle partner of Toogee Treks. Based in Newcastle, Australia, Robert is your main point of contact prior and during the treks.
Robert will be the person you book with, and the person who will be contacting you in the lead up to your adventure, to ensure you are trek ready.
His calm relaxed manner combined with his extensive knowledge of the track, its people, history and geography is crucial in ensuring you have an enjoyable experience.
Robert has been visiting Papua New Guinea since the early ‘80s, and did his first Kokoda Trek in 1995 and has since completed 36 crossings. He grew up in the Wattagan Mountains, west of Lake Macquarie in NSW and became an expert horseman and skilled bushman.  After finishing his apprenticeship as a butcher, he spent several years working in  cattle camps on stations in the far north of Australia, in the Gulf of Carpentaria.
Robert’s experience does not stop there however! After 30 years of running a farm and Theatre Company in the Hunter Valley, he built 2 cinema complexes, established an advertising production company, opened a Japanese/Korean restaurant in Newcastle and a sports equipment manufacturing business. In the process he also became an accomplished teacher of martial arts, (7th Degree Taekwondo Master), and set up a chain of Martial Arts schools up and down the east coast of Australia and PNG
Not only will you find it hard to be stuck for conversation in one of Robert’s tour groups, but you will also be in the company of someone with a huge diversity of knowledge and skills.